Skip to main content
To provide you with the best experience, Hotel Arca uses its own and third-party cookies on its website for technical, analytical and marketing purposes. By continuing to browse our site, you are agreeing to our use of cookies. Please consult our Cookie Notice for more information. 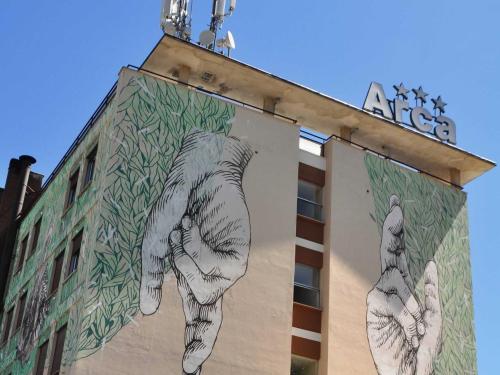 HOTEL ARCA by TELLAS + LUCAMALEONTE + OBQueberry
A project by Gianluca Marziani
In collaboration with Carla Contenti and Lorenza Zuccari
HOTEL ARCA by TELLAS + LUCAMALEONTE is a pictorial intervention that covers the surface of the building on the Via Flaminia.L? Hotel Arca remains the visible testimony of what Enrico Mattei's Eni did to modernize the hospitality of road travelers. Today it is a piece of our post-war period, architectural testimony of a modernity that must be protected but also renewed with? Clothes? adapted to the present. Intervening on the overall surface of the hotel, transforming it into a gigantic environmental sculpture, has meant shaping the territory without distorting its naturist integrity, giving the Umbrian citizens and tourists a precious vision that looks at the present with an eye to the fourteenth century painting (mother of all the frescoes and all the muralisms to come) and one in the world in transformation. TELLAS used the olive leaf as a pictorial pattern, covering the surface with the most peculiar of the natural symbols of Umbria. Its foliage unfolds along the walls like a pictorial ivy, turning the cement into an unexpected forest. The result makes the building a mimetic space in silent dialogue with the surrounding hills, with the blue of the sky, with the
Rocca and the magnificent olive trees that accompany the eye towards Trevi.LUCAMALEONTE has chosen the narration of the Holy Umbrians, selecting some symbolic elements.
The wolf for San Francesco, the white rose and the fig tree for Santa Rita, the sword for San Ponziano, the crow with the crumb for San Benedetto? but above all the hands, gigantic and welcoming, organic shapes that capture the looks, inviting to approach, to slow down the rhythm of everyday life, finding again in the common symbols a contemplative quality that makes the mind travel.
Gianluca Marziani: Thanks to the talent of the artists and the unconditional support of the Contenti family and the Spoleto institutions, we have created something unique for Umbria. The work demonstrates the universal value of an art that speaks to everyone, ethically impeccable, in harmony with the peculiarities of a place, with the deep memory of the territory, with the vision of an innovative but non-invasive present.?PALAZZO COLLICOLA ARTI VISIVE presents COLLICOLA ONTHEWALL OUTDOORCOLLICOLA ONTHEWALL is a project of mural interventions in which eighteen artists have confronted the historic spaces of Palazzo Collicola Visual Arts, thus building a new heritage that today enriches the already impressive collection of the museum. The project, which began in June 2010, officially ended on March 28th 2015 with the presentation of the volume that tells more than 400 square meters of great contemporary painting.
COLLICOLA ONTHEWALL OUTDOOR is the second part of the project of the same name. The idea remains that the wall is the surface of excellence for a public art that approaches people.
The road, the external areas outside the ancient walls, the decaying walls in the historical center and some buildings will be the action space for an urban layout that will reflect on the territorial potentialities, to the point to consider Umbria itself a perfect museum spread among art and nature.The first stage of this trip takes shape on the facades of a hotel? We start the mural on April 7th, come the artists, the street artists Tellas and Lucamaleonte? Here is the first step: Tellas works during the day and his large brushstrokes represent the olive leaves and the Lucamaleon night, projecting the images to the computer on the wall, realizing the sacred symbols? The olive leaves and the first sacred symbols begin to appear:
the monstrance of Santa Chiara
The sparrow and the Wolf of San Francesco. The other symbols, always linked to our Umbrian saints are: the key of St. Peter The sword of St. Ponziano the rose with the fig of Santa Rita da Cascia and, patron saint of Europe, the crow with the breadcrumbs of San Benedetto da Norcia 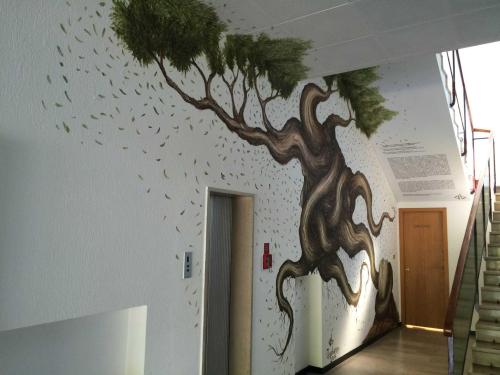 In the lobby is the OLIVO of OB Queberry to welcome guests and invite them to climb flying in the rooms accompanied by the many posters that have honored our city of art during the Festival of the Two Worlds, arriving at the explosion of Donato PICCOLO, IL BALLO DI BOTERO, THE TWO WORLDS of SAVINI. 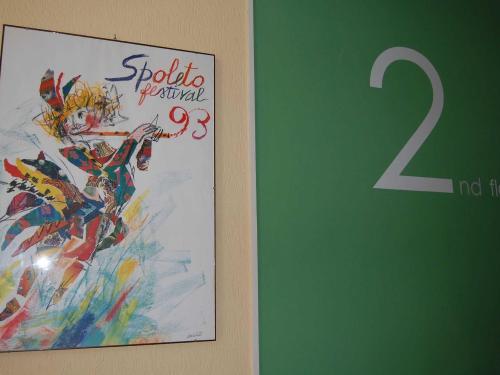